PC-3 SE EVO is a Special Edition of the advanced power conditioner designed to power and protect HI-END audio-video systems. Compared to the model PC-3 EVO the SE version boasts many better components. This conditioner not only effectively protects from any kind of interference and overvoltage in the power grid, but most of all warrants visible improvement of the sound and picture quality in the powered devices. The unit excels with a solid construction, usage of selected components and high quality and aesthetics of workmanship. 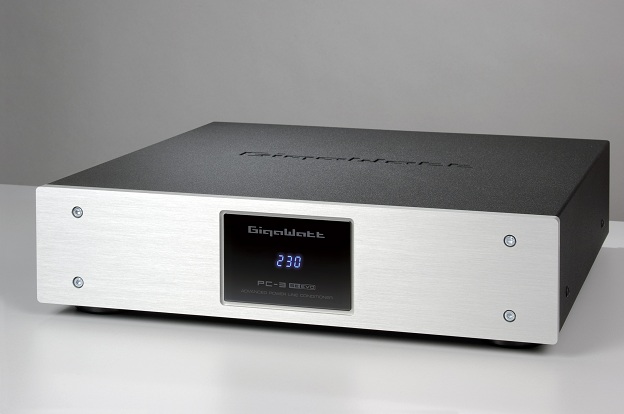 In the construction of the PC-3 SE EVO we resigned from using separation transformers and applied a worked out, multi-stage, parallel filtration instead. The conditioner is equipped with three independent filtering branches, separate for each pair of output sockets. Due to this solution the filtration of each of the branches was adapted to the character of the load, that will be used on those sockets, different for each kind of devices – digital, analog or high current draw units. The autonomous passive filters allow for isolation from interference generated by devices connected to a common power line.

Compared to lower models of conditioners, the PC-3 SE EVO is based on a new architecture of filters and uses more advanced and excessive sized components. Due to the increased efficiency of the new filtering circuits they were mounted using silver solder on massive PCBs with eight-fold content of copper compared to standard PCB. The two layered PCBs have very wide conductive traces made from 280 micrometer thick silver plated copper. Damping of the interference is made in RLC type filtering blocks, built using, among other things, metallized polyester capacitors with low inductance and Super-MSS (Sendust) core filters.

In this conditioner we also resigned from using traditional protective elements, like wire or thermal fuses, which throttle the free flow of current to the protected circuits and by this have a negative influence on the sound. The overvoltage protection of the conditioner is guaranteed by the start block, which contains plasma spark gaps, next-generations of UltraMOV varistors and an initial filter. Protection against overload is provided by a hydraulic-magnetic switch made by the company Carling Technologies, which is made in USA on special order and to GigaWatt specification. This element controls the value of the current flowing through the internal circuits of the conditioner and serves as the main power switch. All those elements, working together with a well designed, modern power grid, warrant a complex protection against overcurrent and overvoltage. 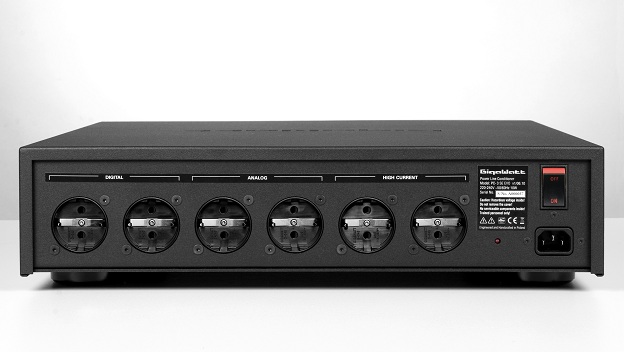 Optionally, the power conditioner can be equipped with the circuit, which eliminates unwanted DC component from the mains (DC Offset Blocker). The Direct Current component (DC Offset) is a very unfavorable phenomenon, which exists in almost every electrical grid. It results in the Alternating Current (AC) sine wave become asymmetrical, what negatively influences any device using transformers. Their cores get magnetized, what translates in higher operating noise (hum), diminished efficiency of the power supply and finally in degraded sound. The DC blocker effectively eliminates this phenomenon without causing any compression or having any other negative influence on the sound.

The effective input voltage (True RMS) is indicated by a precise, digital voltmeter with a red LED display mounted in the front panel. This voltmeter is characterized by resistance to distortion and measurement errors caused by higher harmonics, and does not generate any interference on its own, which could worsen the quality of power filtered by the conditioner. On special order other colors of the display are available: green and blue. The conditioner is also equipped with an additional circuit, signaling problems with its connection to the power grid. A red LED mounted on the back signals improper polarization of the power fed to the conditioner or bad connection of the grounding.

The PC-3 SE EVO uses an innovative, two stage current distribution system, being a proprietary development of the company. It is based on massive power distribution bars of 2nd generation, made from polished, high purity, silver plated cathode copper slabs (Cu-ETP). The first stage allows for lossless and equal distribution of power to the individual filtering branches. The second stage supplies power directly to each pair of output sockets, using crimped and screw-tightened connections and cabling made from silver plated OFC copper wires in FEP Teflon insulation with a cross-section of 4 QMM. The use of the star wiring topology and the high conductance and massive cross-section of about 30 QMM of each of the bars warrants an equal and stable power distribution regardless of the load on any of the conditioner’s outputs.

To allow for the highest possible impulse response the PC-3 SE EVO is equipped with a double buffering circuit with compensation cells with enhanced capacity. This circuit improves the impulse response with non-linear loads, like for example power amplifiers, and levels the difference between input and output power of the conditioner, allowing for almost unlimited impulse capabilities.

The PC-3 SE EVO conditioner is equipped with six high quality power sockets GigaWatt G-040 Schuko, designed and manufactured by the company. The brass connectors of those sockets were silver plated at the factory, without the usage of intermediary metals, like copper or nickel, which could introduce unfavorable series resistance and voltage loss. The increased area of contact and the thick layer of silver guarantee sure contact with the plug pins. The sockets were additionally subdued to cryogenic modification and a demagnetizing process. In order to effectively protect children, the G-040 sockets were equipped with integrated anti-surge shutters (increased protection against touching, conform with VDE 0620). The PC-3 SE EVO is also available with outlets of type NEMA 5-20R, used in North America and some Asian countries, and with Australian outlets of type AS/NZS 3112.

All internal elements of the conditioner were enclosed in a rigid, steel-aluminum chassis. To reduce the vibration transferred on the conditioner its cabinet is additionally damped with a bitumen-polymer composite mattes, and the whole is supported on anti-vibration feet. The front of the unit is made from a plate of solid, milled aviation aluminum. This panel, with brushed and anodized surface is available in two colors – silver and black.

The PC-3 SE EVO is, by standard, equipped with the power cable LC-2 MK3 with 1.5m length. To fully utilize the maximum potential of the PC-3 SE EVO we recommend the usage of the LS-1 MK3 or LC-3 MK3 power cable.

“In terms of sound, the PC-3 SE comes ahead of the basic version of the PC-3 mostly in terms of micro-sounds, so in a place, where seemingly not much is happening. But when we listen to the timbre of instruments like a harpsichord, or acoustic guitar, then we will hear, that the more expensive version handles the reproduction of their nature better. We did not notice, like we did in the case of the cheaper PC-3, any symptoms of dynamics restriction – this is mostly valid in case of power amplifiers. It was even better with the CD player, silence appeared between the smallest sounds, and this did not happen at the cost of their reverbs. The borderline of their coexistence became better audible, what made them more accurate and better defined in space.

Also the GigaWatt PC-3 SE does not fail in a high quality video chain. Plugging a TV set into the conditioner resulted in immediate improvement in reproduction of colors, fluency of movements on the screen, while the background noise was vastly reduced.

CONCLUSION
PC-3 SE is worth to be called a hi-end power conditioner, but we should remember that in the company’s catalog we have an even more expensive model PC-4. However those, who want to power their system with a high class conditioner, and aim for uncompromising devices, and for whom the financial aspect is important, should give the PC-3 SE a try – it is the best evolution of the outstanding PC-3.”