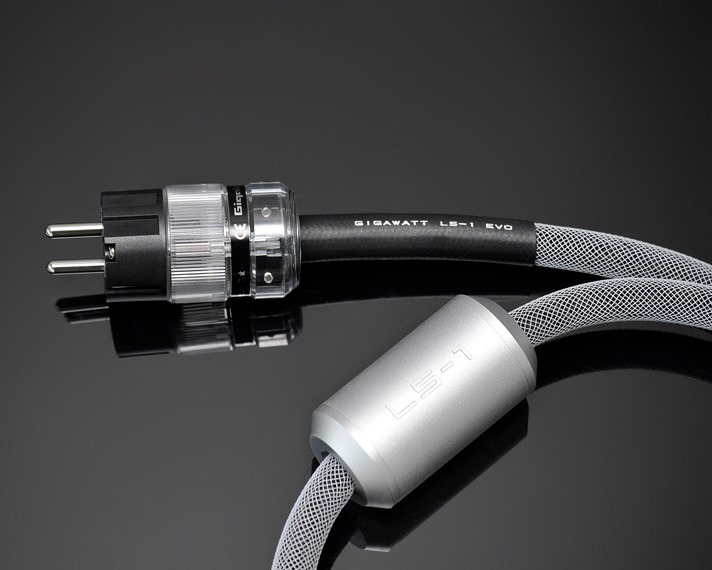 The priority of series LS project was to obtain an uncompromised product, regardless of the production costs connected with used components and assembly. The LS-1 EVO and LS-2 EVO cables reflect the constant technological progress of GigaWatt. They are the result of many years of experience and the effect of research supported by rigorous measurements and listening tests.

The unique feature of LS-1 EVO is the fact that no ready-made components were used in production process. The elements used in cable construction  are subassemblies projected and produced of our own, or manufactured by our cooperates according to precise GigaWatt specification.

Cable assembly is entirely hand-made. Creating one piece of cable takes many hours of the specialist’s work and all stages of the production process take place under strict supervision providing best product quality and repeatability of subsequent items.

The main design assumptions remain the same, while the use of new conductors is a significant change. Instead of solid wires, we used multi strand. One thicker wire has been replaced by seven thinner ones, forming a lead with a total cross section of 1,5mm2.

The design is 7 x 1.5 mm2 lead, where each lead consist of 7 strands, spun in a tight pitch. The conductors are made of silver plated oxygen-free copper with a purity of 5N, produced according to our specifications. This design increases the active surface area of ​​the wire and makes the cable more flexible.

The whole structure is covered by a sealed copper screen, protecting against EMI and RFI noise.

In the cable construction, great importance was also attached to the reduction of vibrations generated by the electromagnetic field induced around conductors. Working wires are surrounded by a multilayered material, dumping unwanted vibrations. From the outside, the cable is additionally protected by a black, textile jacket made of polyolefin fibers and an antistatic mesh that prevents electrostatic accumulation.

Especially dedicated for LS-1 EVO a new loss-free passive filter of nano-crystal alloys was worked out. It is being assembled in a preciously selected spot in a cable and constitutes additional protection against parasitic noises and oscillations on the cable output.

Cable assembly is completely manual. Making one piece of LS-1 EVO, requires hours of specialist work, and all stages of the manufacturing process take place under strict control ensuring the highest quality of product and repeatability of subsequent items.

It is also worth noticing, that the cable is equipped with splendid proprietary plugs, made to our specifications. Those plugs are of very high manufacturing quality, have low connection impedance and long term connection reliability. Their solid connectors are made of compact brass covered with rhodium, and were additionally subject to cryogenic treatment and de-magnetization.

All conductors are connected without tin, and connections with plugs are screwed, which minimizes contact impedance and ensures trouble-free operation.

LS-1 EVO is recommended particularly for powering of high power consumption appliances, although will successfully power reference audio and video systems too. The cable is also available in high power version as LS-1HC EVO, being an optional equipment for the top GigaWatt PC-4 EVO+ power conditioner.

“LS-1 is a uncompromisable product, directed towards the narrow circle of audiophiles, who are not concerned with complaining theoretics and want to get everything they can from their systems. In this cable we will not find any ready-made components, other cable manufacturers use. The construction is GigaWatt’s original concept, and each unit is hand made, including controlling the windings of the conductors, applying the shield or isolation. Technologically – this is rocket science, sound wise – a fairytale. The LS-1 injects a new shot of cleanness into the sound, improves dynamics, extends bass and dots the “i” in terms of space. And this all in modest, black plaid, which will allow to hide the expense before the wife.”

SOUND “My attention was drawn by the clarity and selectiveness of the sound. It seemed a bit thinned, because the individual elements were further apart, and stereophonics was filled with large amounts of air, what resulted in a system with Audio Physics Tempo VI not even with spectacular, but actually weird spacial results. The German loudspeakers sound point wise. They have a natural ability to locate the sounds on a small area, and draw the contours with a clear line. The top GigaWatt power cable allowed to bring this ability to a new level. The effect was spectacular, and called up a memory of a listening session with the Avanti III, which impressed me a few years ago. This is a sound, that can be called “chiseled” – when each detail is served apart.”

“The resolution is one of the most spectacular assets of the GigaWatt flagship cable. This power cable cleans the sound radically, and it works on space like a visit of the health authorities on a restaurant owner. There is mathematical precision in the sound. Each and every sound has its own place and does not influence any other. Equally spectacular was the presentation of the bass. Placing the LS-1 in the test system resulted in deepening of the bass and at the same time, quickening of its reactions. This is a very rare combination. But I must confess, that it was easy to be picked up with the Audio Physic. The Tempo VI are not scarce on the lower octaves, but I never heard them going into subsonic levels. It was like the frequency response would get by a few Hz down, and in this case, it made a difference.

When one day I replaced the LS-1 with other power cords, I learned to appreciate a few more assets of the GigaWatt. Fascinated with its detailedness, space and bass extension, I did not notice the coherence and timbre (…). But the change from the LS-1 to DIY cables was not acceptable at all.

After checking many configurations of the power cabling, I got to admire the top GigaWatt. It is a product worked out to the smallest details, and composed with expertise.”

CONCLUSION
“Gigawatt does not disappoint again.”

SOUND “The most expensive GigaWatt cable plugged into the (…) CD player replaced an Acrolink 7N-PC-9300 for an incredibly interesting effect. This turned out to be a highly dynamic cable that was almost impulsive.”

“This was a ‘live’ sound in every meaning of the word – vigorous, strong, dynamic, expressive in the midrange and with a powerful bass. It was by far the best Polish cable I have heard and not only from GigaWatt. Comparing it to the Acrolink, the Japanese cable was slightly brighter and had a subtly clearer midrange whereas the LS-1’s midrange was more saturated and its bass more potent. Also its treble was more vivid.”

“In favor of the Polish cable meanwhile is its relatively low price when factoring imported competitors and a truly exceptional deep sound. It will allow you to melt into the armchair and listen to disc after disc with curiosity about the next discovery. You’ll never feel bored. Simultaneously this isn’t a lit-up hard sound, which initially could be mistaken as dynamic and open.”

“When used with the PC-2 EVO conditioner, this cable becomes a true revolution. True, the price doubles too but listen to this combination before you cry wolf. The pairing is unbelievably saturated and vibrant. It reaches deeply into the emotions of micro events to make us believe we’re partaking in a live experience. Obviously that’s an illusion as we’re listening to mere recordings but suspending disbelief is the relevant thing. There still remains a gap to the four-times dearer Acrolink PC9300 but this difference is not grave enough to kill for (or to have your wife kill herself in despair over your expensive hobby). The PC-2 EVO + LS-1 is something extraordinary and absolutely surprising at its price.”