PF-1 EVO is the latest, modified version of the basic filtering power strip, designed for power distribution and protection of budget audio and video systems.
The main change of the PF-1 EVO is internal cabling based on the company’s GigaWatt Powerlink copper wire OFHC, 4mm2 cross section.

The PF-1 EVO is a special product in the GigaWatt offer, because it surprises with its solid construction and quality of workmanship, and, at such an affordable price, an extremely positive effect on the sound. 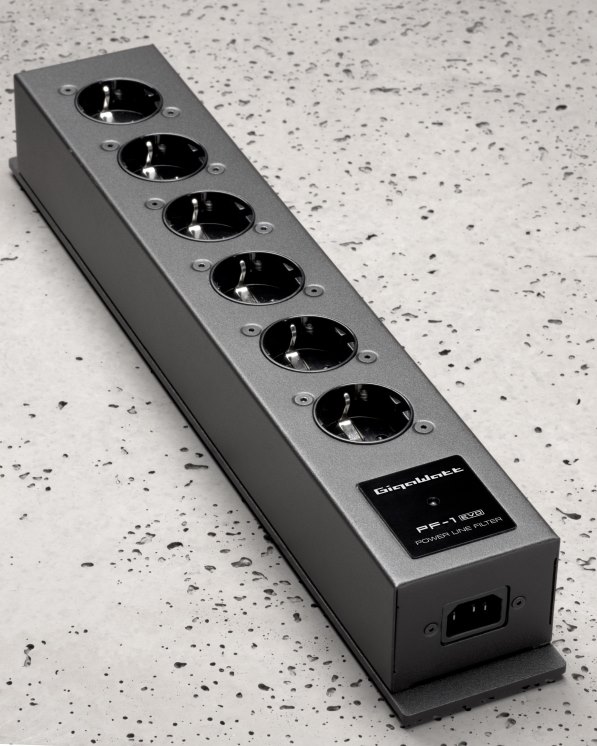 The strip is made using high quality components. The distortion is filtered in a RLC filtering block. It is built using metalized polyester capacitors with low inductance and an IP (Iron Powder) filtering core. All components of the filters are soldered to a massive PCB with large cross-section of the traces, with silver solder.

In this strip we also resigned from using traditional protective elements, like wire or thermal fuses, which throttle the free flow of current to the protected circuits and by this have a negative influence on the sound. Protection against overvoltage and power surges is guaranteed by a multi-stage protection circuit, composed of plasma sparks and new generation of UltraMOV varistors. Those elements, working together with a well designed, modern power grid, warrant a complex protection against overcurrent and overvoltage.

The PF-1 EVO uses an innovative current distribution system, being a proprietary development of the company. It is based on massive power distribution bars of 2nd generation, made of polished, high purity, cathode copper slabs (Cu-ETP). This system distributes the current directly to each pair of output sockets, using crimped and screw-tightened connections and GigaWatt PowerLink cabling made from OFHC copper, with a cross-section of 4 QMM wires. The use of the star wiring topology and the high conductance and massive cross-section of about 30 QMM of each of the bars warrants an equal and stable power distribution regardless of the load on any of the strip’s outputs.

The PF-1 EVO power strip is equipped with six high quality power sockets GigaWatt G-040 Schuko, designed and manufactured by the company. The brass connectors of those sockets were silver plated at the factory, without the usage of intermediary metals, like copper or nickel, which could introduce unfavorable series resistance and voltage loss. The increased area of contact and the thick layer of silver guarantee sure contact with the plug pins. The sockets were additionally subdued to cryogenic modification and a demagnetizing process. In order to effectively protect children, the G-040 sockets were equipped with integrated anti-surge shutters (increased protection against touching, conform with VDE 0620). The PF-1 EVO is also available with outlets of type NEMA 5-20R, used in North America and some Asian countries, and with Australian outlets of type AS/NZS 3112.

The massive and durable chassis of the strip is made from metal. This creates a perfectly closed shield, protecting the inside filter and power distribution system from RFI noise. The power strip is also equipped with a LED signaling proper function and power available on the sockets.

The strip is also equipped with a high quality IEC socket, allowing their user to connect any power cable. The power strip is equipped with the power cable PowerSync with 1.5m length. To fully utilize the maximum potential of the PF-1 EVOwe recommend the usage of the PowerSync PLUS or LC-2 EVO  power cord.

This product is covered by an insurance policy for the connected equipment, with a total insurance value of 1000000 PLN. The insurance is valid only in the European Union member states territory.

LISTENING IMPRESSIONS
“An inexpensive power strip effectively protects the equipment and does not mess-up the sound is a finding worth your attention. And this is how the PF-1 is. It gives the feeling of being protected, while not diminishing the dynamics and resolution of the sound.”

“The music had the same amount of energy, the snare drum hit decidedly, and the details were not filtered out. PF-1 is worth being recommended. Not because it improves anything, but because it does not take anything away from the music. Aren’t you sure, you will achieve that? Please connect your gear to a computer strip, and you will find it out quickly enough.”

CONCLUSION
“A further Polish product worth recommending. And this is only the beginning of the line of power products by GigaWatt.”

“A power strip is bare necessity in case of most systems. And if we already use one, it should be of good quality, what does not necessary mean expensive. The power strip (the basic model) from the Zgierz based GigaWatt is exactly like described, and it received a result bashing its competitors – 60% (the highest result in our plebiscite).

It has a built-in over-current protection (up to 20kA) and is being delivered with the LC-1 power cable bundled, worth 200 EUR. It is a piece of solid workmanship, both in electrical and mechanical terms.

Internal connections are made by means of thick rails made from pure copper. Due to that solution it does not limit the quality of sound, its dynamics, transparency or saturation of timbres.

The weaker results of competitors are a result of a tendency visible on the market – high interest in power accessories.”

“One of the cheapest ways known to us of breeding power sockets, which does not cause any degradation of the sound compared to the wall socket. Even more, this basic power strip from the Lodz based company GigaWatt included in the package, worth 200 EUR.

Despite the relatively low price, the PF-1 has a very solid electric and mechanical construction. Internal connections are made with thick metal rails, rather than thin cables. Due to this, the sound does not loose any dynamics or transparency, while the timbres become more pleasing and richer.

We have to pay more for a product of that class coming from Western manufacturers. Those, who laugh and do not believe, while using a cheap computer strip, should try this one. A shock is guaranteed.”

“A look at the power strip reveals, that it is made from precisely bent steel sheets, less thick than the Ener. This means also lower weight, but not lesser manufacturing quality, which is very good.”

“Our appreciation goes to the very solid packaging and well made operating manual – elements, which, for many other Polish products, leave much to be desired, or are even disappointing.”

“For sure this power strip does not impoverish the palette of timbres, which were richest among the tested three units. This is accompanied with good precision and well reproduced details, while not over-exposing the latter. The lower frequencies are somewhat thickened, which adds monumentality to the sound.”

“Concluding, the PF-1 is an excellent choice for systems with a thinned and sharpened sound. But only for those. The interference with the sound is not big, and easily accepted. At the price you have to pay for the GigaWatt PF-1 it is really a bargain.”

CONCLUSION
“It cannot pass unnoticed, that given the price performance (and workmanship) relationship, especially the GigaWatt PF-1 stands out. Taking into account the price of the power cable, which must be purchased separately for the other strips, it comes at half the price of the competitors.” “This means, that for every zloty spent on the PF-1 we get the most and best sound. And in addition the protection of our valuable gear.”

“The cheapest power strip PF-1 is the ideal solution for all, who want to get good results, while not investing too much money in the power chain.”

“We devoted quite some time to really test the abilities of the F-1 in our system. One thing we are sure of: the cheapest position in the GigaWatt catalog does not impair the sound in even very worked-out audio/visual systems. Regardless if we attached a full home cinema system, composed of an LCD screen, amplifier tuner and DVD player or a high class stereo system, we did not feel any negative influence on their performance. In contrary – with every hour spent on listening, the more we were sure that the PF-1 works. It could be felt by sharper space delineation and crisper sound in the whole frequency range.”

VERDICT
“Not as worked out as the more expensive PF-2, but it the same workmanship level.”