Gigawatt POWERPRIME is the first model from a new family of conditioners, which sets trends for future project concepts that will be gradually initiated in our following products.
POWERPRIME provides effective surge protection, and at the same time supplies the devices with clean, well-filtered energy. That makes it an essential part of every modern audio/video system. 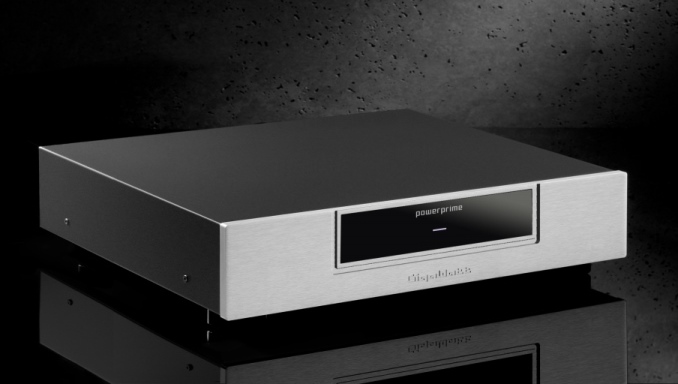 CONSTRUCTION:
All elements of the device are mounted in a new, rigid, steel/aluminum chassis, with a modular structure, which allows the outlets assembly  in various standards. The housing is based on anti-vibration feet, which isolate the device of undesirable interference, coming from the ground.
The new design front panel, is made of a thick piece of aviation aluminum, the surface of which, after precise milling, is anodized in two color variants – black or silver. In the central part of the front there is a filter enable indicator.

The conditioner is also equipped with a system that indicates incorrect connection of the device to the mains. The red LED at the back, indicating the wrong polarity of the power supply, or incorrectly connected grounding or lack of grounding.
POWERPRIME is equipped with six power outlets G—040.  Brass connectors are silver-plated, without the use of intermediate metals such as a copper or nickel layer, which could cause detrimental serial resistance and thus lower the voltage. Strong, stable connection, bigger connection surface and a thick layer of silver guarantee perfect contact with the plug pins. Additionally, the sockets are cryogenically processed and de-magnetized.

TECHNICAL SOLUTIONS:
POWERPRIME is based on the new architecture of the RLC filtering branch. The device does not have traditional protection elements, such as thermal or blow fuses, which throttled the free flow of the current, have a negative influence on the sound.
Surge protection is provided by a protection block integrated with the filter, equiped with plasma spark gaps and a new generation of UltraMOV varistors. These elements, in combination with a properly executed, modern electrical installation guarantee comprehensive protection against overvoltages and overcurrents.

The surge protection is provided by the overvoltage block integrated with a filter that contains plasma spark gaps, a new generation of UltraMOV varistors and a pre-filter. These elements, in conjunction with a properly made, modern electrical installation, guarantee comprehensive protection against overvoltages and overcurrents. Interference suppression is ensured by a filtering system that was built, among others, on Premium class interference suppression capacitors and IP filter cores (Iron Powder). The filter system is activated by an internal high-in-rush relay with silver contacts with a large surface area and a switching capacity of 4000VA.

All electronic components of the filter are mounted with silver solder on PCB’s with extremely wide conductive traces made of copper (total thickness of conductive layers is as much as 70 micrometers). Short connections and a very large cross-section of paths reduce the transition resistance and significantly increase the current carrying capacity of the entire filter.

The device uses a buffering system with a GigaWatt Audio Grade compensation battery, which increases the current efficiency at non-linear loads which are, for example, power amplifiers and reduces the difference between the power at the input and output of the conditioner. This allows for almost unlimited impulse possibilities, unheard of in other similar passive conditioners and unattainable for active power conditioners.

The internal wiring is based on GigaWatt Powerlink cables from OHFC copper with a cross-section of 4 QMM. The connection system in the star topology leads the current to the output sockets through a current distribution system based on massive third generation distribution bars made of polished, high-conductive copper (OHFC 10100 with a purity of 99.995%). The large cross-section of each rail (30QMM), high wiring conductivity and star star connection guarantee an even and stable distribution of power at each output socket – regardless of the load of the other outputs of the conditioner.

-DC Offset Blocker – the conditioner can be equipped with a circuit eliminating unwanted DC component of the power grid. This DC component is a very deteriorating phenomenon, which exists in almost all power grids. It results in the sinus wave of the alternating current become non-symmetrical (non-sinusoidal) and has negative impact on all devices using transformers. It causes their cores to become magnetized, what increases their noise, diminishes the efficiency of power supplies and lower sound quality as a result of those. The DC blocker allows to eliminate this phenomenon effectively, without causing any compression or any other negative influence on the sound

-Rolling-Ball Isolation System feet – The device can be equipped with a new kind of feet with a mechanism called Rolling-Ball Isolation System. This is an anti-vibration system comprised of two parts (external and internal) made from solid aluminum, with two runs with balls between them. The setup is to minimize the points of contact between the feet, and then the chassis of the conditioner and the rack, what in consequence translates into a significant reduction of mechanical vibration, which negatively impacts the internal elements of the conditioner, what in turn degrades its sound. Another isolation element, on which the whole construction is placed, is a proprietary elastomer, 5mm thick.

-Power cords – higher models. The POWERPRIME is equipped as standard, with the PowerSync PLUS 1.5m To maximize the potential of the conditioner we recommend the use power cords LC-2 EVO or PowerSync ULTRA

-Output power sockets in a different standard. The PowerPrime is equipped with the G-040 Schuko power sockets used in most European countries. To protect your children, those sockets can be equipped with automatic anti-surge protection (improved protection conform with VDE 0620). Also available are versions with sockets in other standards like: NEMA 5-20R, used in North America and some Asian countries, or AS/NZS 3112 used in Australia.

This product is covered by an insurance policy for the connected equipment, with a total insurance value of 1000000 PLN. The insurance is valid only in the European Union member states territory.

SUMMARY:
And it seems to me to be the greatest achievement of GigaWatt as a company and Adam Szubert as a designer. Powerprime has the attributes of the most expensive conditioners of this company. It is  the ability to enter the recording, showing us the music, not the details of production. It is also a strong, energetic treble and clear middle, but with no brightening of the first one and reducing the another either.

Yes, the medium bass is slightly took back, and the whole range is not as saturated as in more expensive conditioners. But it didn’t disturb, I didn’t pay attention to it. Because with Powerprime we pay attention to music. Let’s use it in a tonally balanced or even slightly warmed up  system, and we can sleep peacefully, as our system will be well protected against mains  danger. And while not sleeping,  we will listen to the music with pleasure. This is a good example of transferring technology from expensive products without paying a high “transfer” tax. Professionally designed, well-made conditioner with the sound that can be described shortly: spectacular. That is why the RED Fingerprint award.